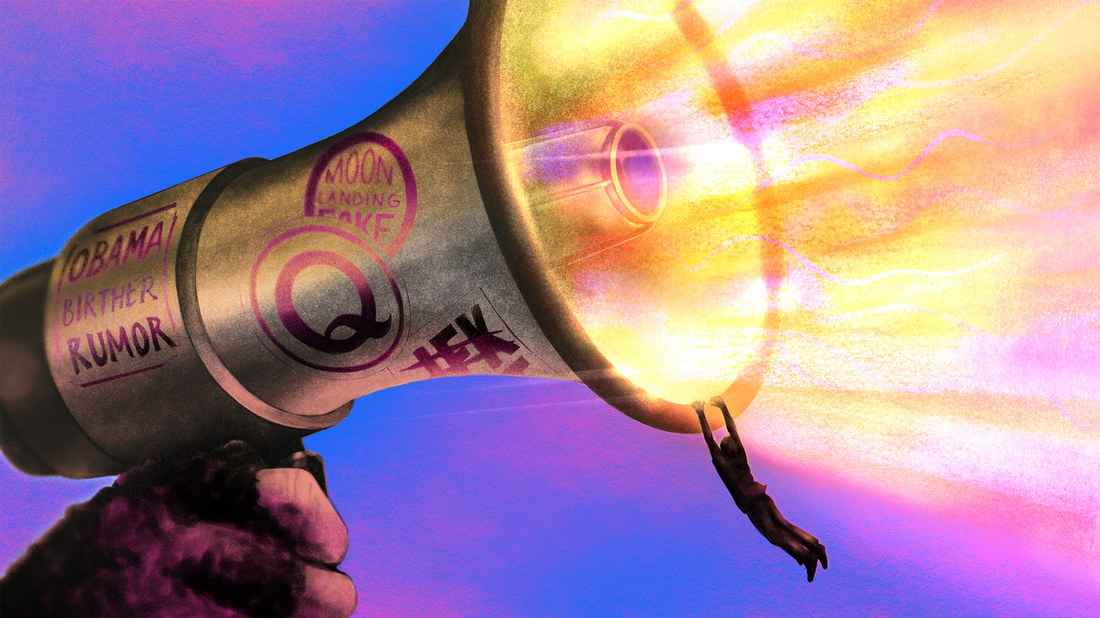 False conspiracy theories have always been a part of U.S. history, but experts say they’re spreading faster and wider than ever before. 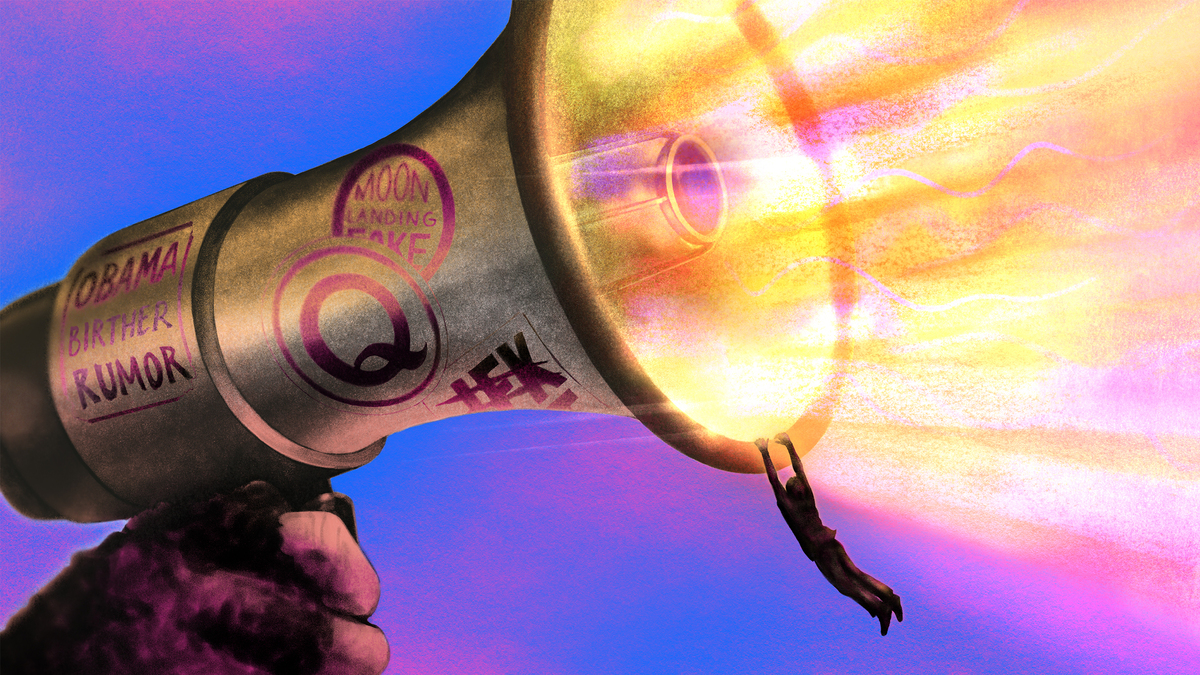 False conspiracy theories have always been a part of U.S. history, but experts say they’re spreading faster and wider than ever before.

Millions of people watched the moon landing live on TV in 1969. But more than 50 years later, Bonnie Garland still isn’t buying it.

“I personally do not believe that man has ever been out of the atmosphere,” says Garland, a self-described housewife from Tucson, Ariz. “I’m a very inquisitive person. Always have been. So I question everything.”

Garland also is skeptical that the Sept. 11 attacks were carried out by 19 al-Qaeda terrorists – even though they were. She doesn’t believe that former President Barack Obama was born in the United States – even though he was. And she believes, falsely, that the coronavirus is just “another strain of the flu.”

Garland is not alone. An NPR/Ipsos poll in December found that a significant number of Americans believe disinformation about the coronavirus and about settled historical facts. The findings underscore the enduring nature of unfounded conspiracies at a time when experts say disinformation is being spread on an unprecedented scale.

“There is certainly a bloc of people who are willing to believe conspiracies sort of across the board,” says Chris Jackson, a pollster at Ipsos, “even if it doesn’t have any basis in reality or fact.”

That poll found that nearly one in 10 respondents don’t believe humans actually landed on the moon. Even higher numbers were under the misapprehension that mass shootings in recent years were staged hoaxes or that Obama wasn’t born in the U.S. On top of that, another 20% of respondents say they didn’t know what’s true in each case.

Bogus conspiracy theories like this have always been a part of U.S. history. Only now, experts say they’re spreading faster and wider than ever before – accelerated by social media, encouraged by former President Trump, and weaponized in a way not seen before in American history.

“It has been getting worse,” says Kathryn Olmsted, a professor of history at the University of California, Davis, and the author of the book, Real Enemies: Conspiracy Theories and American Democracy, World War I to 9/11. “Conspiracy theories have become more dangerous and more widespread, just even in the last 10 years.”

Moreover, Olmsted says, a former president of the United States is giving credibility to false conspiracy theories on an unprecedented scale.

For months, Trump and his allies have repeated the lie that the election was stolen — and polls indicate a lot of people have bought into this. Trump said it again in a speech to supporters on Sunday.

In another Ipsos poll from January, one-third of respondents falsely believed that voter fraud helped President Joe Biden win the November election. About one-quarter of respondents believed other unfounded conspiracies as well: that electronic voting machines switched votes from Trump to Biden, or that Democratic cities and counties falsified their vote totals.

Polls from Ipsos and other organizations have found that most Americans accept the legitimacy of the Biden administration, but disinformation continues to swirl.

One delusional idea is that Trump will take the oath of office on March 4, the original Inauguration Day before the passage of the 20th Amendment in 1932.

Followers of this baseless QAnon conspiracy believe that Trump will vanquish a cabal of Satan-worshipping pedophile elites who secretly run the country in a cataclysmic event known as “the Storm.”

When that didn’t happen before Biden’s inauguration in January, some QAnon followers pinned their hopes on March 4 instead, though other QAnon influencers have recently expressed doubts about the date.

There appears to be a divide among QAnon influencers about the March 4 conspiracy theory, a sovereign citizens-inspired claim that’s in part forced National Guard troops to stay in DC. Some influencers have seemingly expressed support, while others have expressed skepticism. pic.twitter.com/QqLthoM1fp

Almost 5,000 National Guard troops remain deployed at the U.S. Capitol as a precaution.

“What’s dangerous is when people mobilize based on misinformation,” says Joan Donovan, research director at the Harvard Kennedy School’s Shorenstein Center on Media, Politics and Public Policy, where she studies how disinformation spreads online.

“It doesn’t just put communities in danger; it puts law enforcement in danger as well.”

Donovan says the Internet gives conspiracy theorists a place to connect, and social media gives them a way to quickly disseminate their ideas on a mass scale. She says disinformation peddlers are trying to drive traffic to websites where they can make money, or they’re trying to shape a political narrative.

“Social media tends to drive the fringe to the mainstream,” Donovan says.

“There are so many conspiracy theories on the Internet. The scale is astounding,” she adds. “We’ve come to start to think about it as an attack on the supply chain of information, because lies at that scale do displace truthful narratives.”

Until recently, historian Kathryn Olmsted says, it was harder for these fallacious ideas to gain traction. She has spent a lot of time researching people who trafficked in conspiracy theories about the assassination of former President John F. Kennedy in the 1960s.

“They had to work pretty hard to identify each other. They would put up flyers at the local library, or they’d write letters to the editor. And eventually, they had groups and newsletters and they would have conferences,” Olmsted says. “I mean, they did it, but it took a while.”

All the evidence will never be enough

“These conspiracy theories are becoming more all-encompassing,” Olmsted says, “and they are encouraging more people to think that it is logical and necessary to use violence against their government because their government is controlled by a group of Satanic pedophiles.”

There may be some reasons for optimism. Experts say social media platforms are looking for better ways to counter disinformation. They also say the situation might improve somewhat after the pandemic, when Americans have more real-world interactions that can help debunk what they’re reading online.

But Olmsted says recent history is not encouraging. Consider the lie that Barack Obama was born outside the U.S. – a “depressing” case study for people who study conspiracy theories.

“It just shows how difficult it is to debunk a conspiracy theory when you have some conspiracy theorists who are really committed to it,” Olmsted says. “They’re given evidence that it’s not true, and they say, well, that evidence is fake.”

Olmstead points to all the evidence that Obama was born in Hawaii on Aug. 4, 1961. “There’s the birth certificate. There’s the birth announcements in the newspapers. There’s eyewitness accounts,” she says. “It’s as documented as any historical fact.”

But for some people, all the evidence in the world will never be enough. That, experts say, suggests that the current crop of conspiracy theories may be around for a long time to come.