Hello Nature readers, would you like to get this Briefing in your inbox free every day? Sign up here 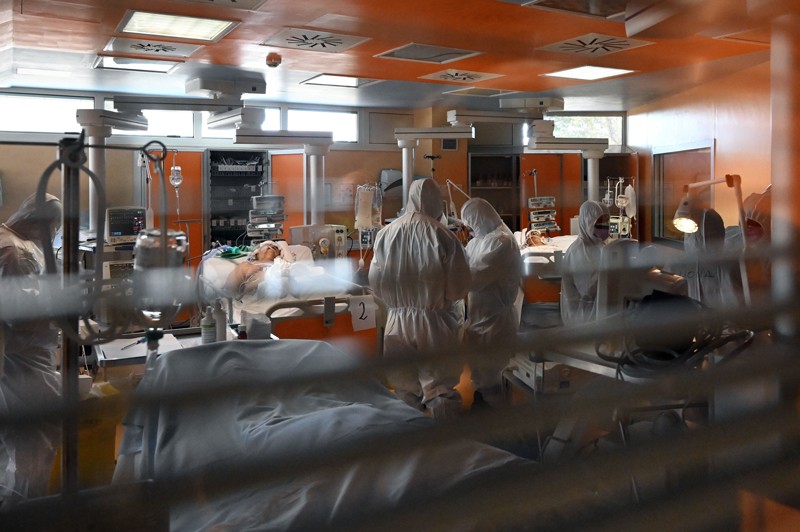 Clinical research has been disrupted as hospitals devote more resources to caring for people critically ill with COVID-19.Credit: Alberto Pizzoli/AFP/Getty

Scientists are rushing to launch clinical trials of experimental vaccines and treatments for the coronavirus — while clinical trials of therapies for cancer and other illnesses are being put on hold. Neena Nizar and her family were poised to harvest the fruit of a decade of hard work and sacrifice: a clinical trial of an experimental treatment for her two sons’ rare and painful genetic disorder. Then came COVID-19. “I feel like we were chugging along on a train and then somebody dropped a huge boulder on it,” says Nizar.

The healing ozone layer above Antarctica is shifting wind patterns around the globe — most notably, pausing the movement toward the pole of the summertime jet stream in the Southern Hemisphere. Satellite observations and climate simulations reveal that the jet stream shifted from about 49° S to 51° S between 1980 and 2000. After 2000, when the ozone layer began to recover as a result of the Montreal Protocol that effectively banned ozone-killing chemicals, the change has halted.

Get expert analysis of the research by meteorologist Alexey Karpechko in the Nature News & Views article. 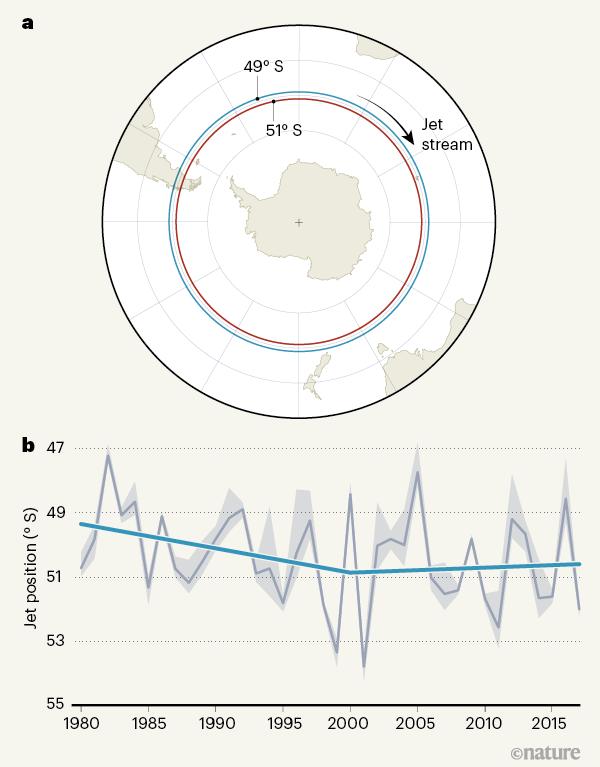 Figure 1 | Changes in the summertime jet stream in the Southern Hemisphere. a, The jet stream in the Southern Hemisphere forms a near-circle around Antarctica in the troposphere — the lowest layer of the atmosphere. b, Banerjee et al.6 have reanalysed data that record the position of the summertime jet stream during the past few decades. The grey line shows the average position determined from their analysis; the envelope around the line indicates the minimum to maximum range. The blue line indicates the underlying trend, and shows that the jet stream shifted from about 49° S to 51° S between 1980 and 2000 — the years when the stratospheric ozone layer over Antarctica was becoming depleted. The trend alters after 2000, when the ozone layer began to recover as a result of the Montreal Protocol, which banned ozone-depleting substances; the position of the jet stream did not alter significantly during this period. Banerjee and colleagues show that ozone recovery is the cause of the pause in the jet-stream shift. (Graph from Fig. 1b of ref. 6.) 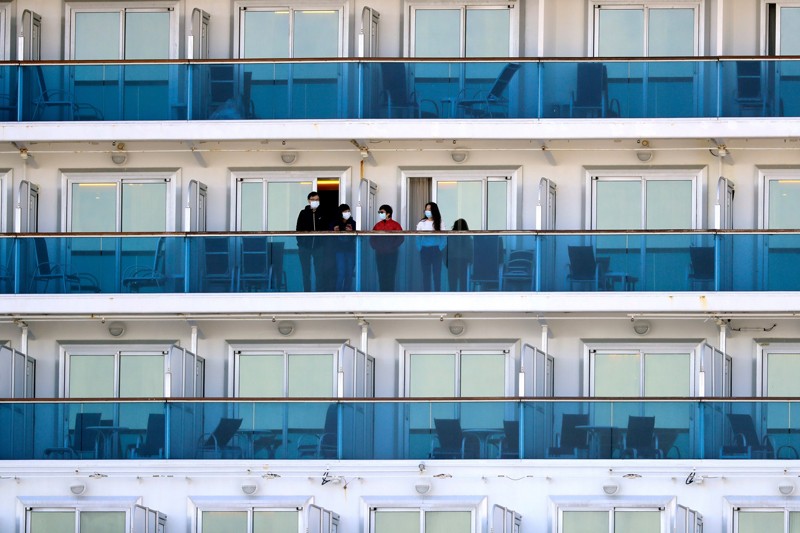 • The COVID-19 outbreak on the cruise ship Diamond Princess has given researchers the rare opportunity to study the virus in a highly controlled population. Almost all of the 3,711 passengers and crew on the cruise ship were tested, some of them more than once. Some 700 people were infected, with a substantial number — 18% — showing no symptoms (the passengers included a large number of elderly people, who are most likely to develop severe disease if infected, so the share of asymptomatic people in the general population is probably higher). In a separate preprint study that has not yet been peer reviewed, taking into account data from the ship and from China, researchers estimate a case fatality rate of around 1.1% — much lower than the 3.8% estimated by the World Health Organization. (Nature | 5 min read)

• A group of 100 research societies, professional organizations and universities is calling on the US government to lift restrictions on the use of fetal tissue in research. They argue that the limits delay necessary work on potential treatments for COVID-19. The ban was brought in to appease those who object to the use of tissue from aborted fetuses. (Nature | Continuously updated)

• Some epidemiologists and public-health researchers are watching with horror as the United States fumbles the COVID-19 outbreak within its borders. A lack of preparation, a shortage of equipment where it’s needed and a shortfall in testing mean that the country might “end up with the worst outbreak in the industrialized world”, says epidemiologist Seth Berkley, who heads Gavi, the Vaccine Alliance. The Atlantic takes a scathing look at what it will take for the country to overcome the pandemic — and thrive afterwards. (The Atlantic | 22 min read)

• Lives depend on decisions that are made on the basis of the predictions of mathematical models. Looking at the differing responses of the Netherlands, Hong Kong and the United Kingdom, Science explores the influence and limitations of COVID-19 models. (Science | 9 min read)

After being disappointed with drug companies’ achievements after the SARS and MERS outbreaks, biologist Stephen Burley considers how to avoid the same mistakes with COVID-19. (Nature | 4 min read)

The Exclusion Zone around the wreck of the Chernobyl power plant, in present-day Ukraine, represents a glimpse of the past of civilization after its demise, the “final resting place of the future”. This has made the site of the 1986 nuclear accident into a morbidly fascinating tourist destination. “Immediately you are struck by the strange beauty of the place, the unchecked exuberance of nature finally set free of its crowning achievement, its problem child,” writes author Mark O’Connell.

Quote of the day

This calendar of science livestreams, talks, virtual dance parties and general good times is thanks to neuroscientist and artist Christine Liu and the STEM Squad community. If you prefer a quiet night (maybe post dance party?), how about a soothing evening of transcribing the United Kingdom’s 200 years of handwritten rainfall data?

Invite me to your virtual dance party (just kidding, I’ll be combing through Met Office records) — or send me any feedback on this newsletter — at briefing@nature.com.

With contributions by Smriti Mallapaty and Davide Castelvecchi

An essential round-up of science news, opinion and analysis, delivered to your inbox every weekday.