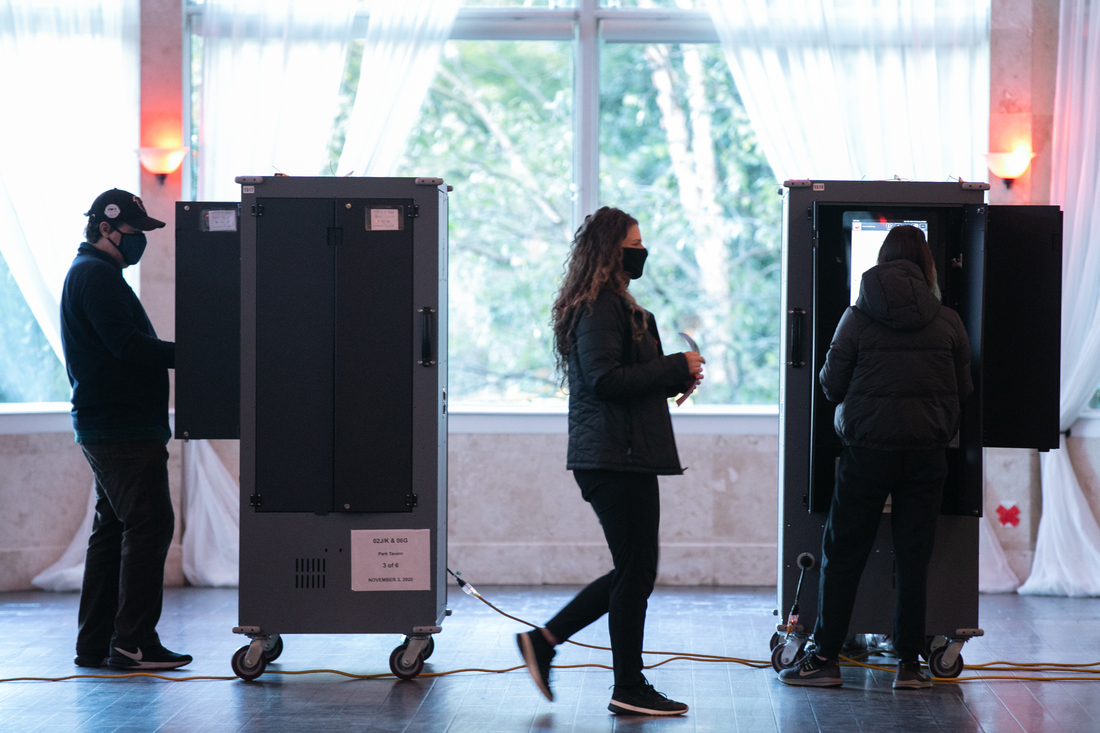 Voters in Atlanta casting their ballots on voting equipment made by Dominion Voting Systems. After losing the election, former President Trump and his allies spread conspiracy theories about the company, which has responded with defamation suits to combat the disinformation. 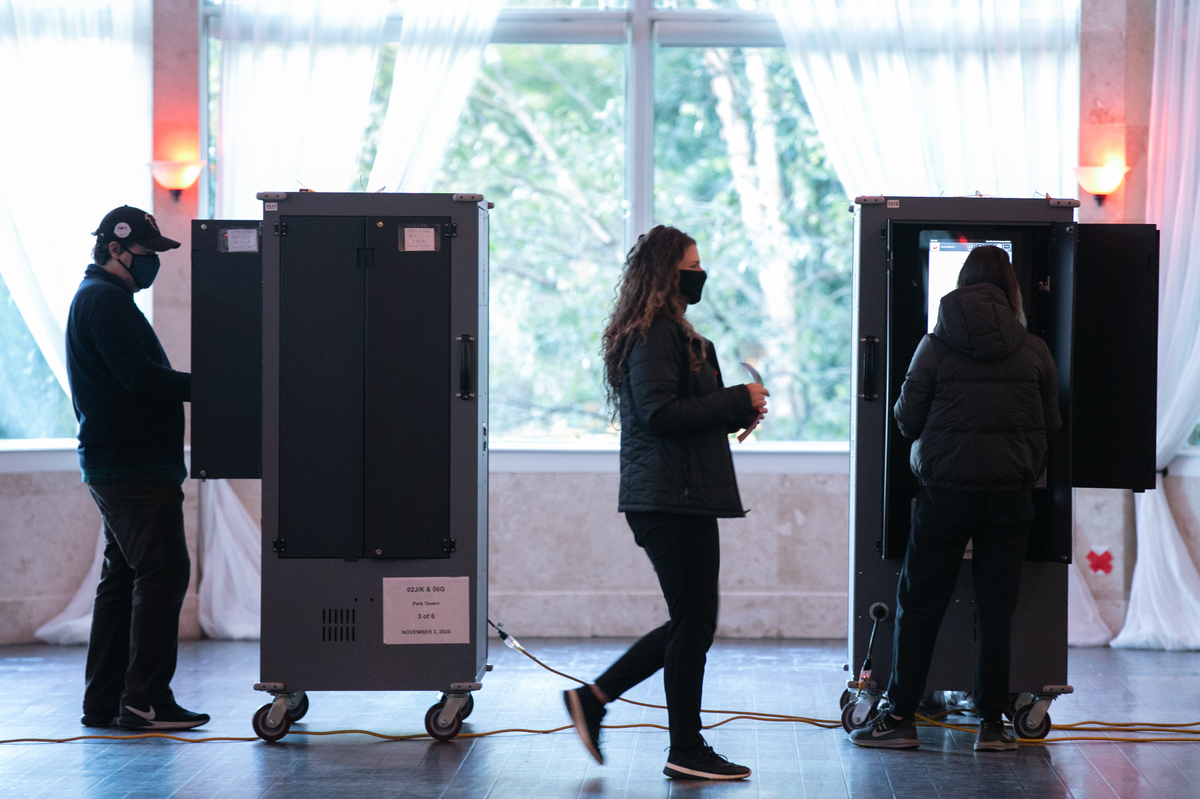 Voters in Atlanta casting their ballots on voting equipment made by Dominion Voting Systems. After losing the election, former President Trump and his allies spread conspiracy theories about the company, which has responded with defamation suits to combat the disinformation.

The victims of some of the most pernicious conspiracy theories of 2020 are fighting back in court.

Voting equipment companies have filed a series of massive defamation lawsuits against allies of former President Trump in an effort to exert accountability over falsehoods about the companies’ role in the election and repair damage to their brands.

On Friday, Fox News became the latest target and was served with a $1.6 billion defamation lawsuit by Denver-based Dominion Voting Systems after several of the network’s hosts entertained on air conspiracy theories pushed by former President Trump that the company had rigged the results of the November election against him in key states.

“Fox sold a false story of election fraud in order to serve its own commercial purposes, severely injuring Dominion in the process,” according to the lawsuit filed Friday in Delaware. (In a statement Friday, the network said the lawsuit was “baseless” and that the company planned to vigorously fight it in court.)

Dominion has also sued Trump associates Rudy Giuliani, Sidney Powell and Mike Lindell for billions in damages. The company is one of the top providers of voting equipment to states and counties around the country and typically relies on procurement decisions made by elected officials from both political parties.

A Dominion employee who was forced into hiding due to death threats has sued Giuliani, Powell and the Trump campaign. Another voting systems company, Smartmatic, has also filed a defamation lawsuit against Fox News.

Some see these legal fights as another way to take on viral misinformation, one that’s already starting to show some results although some journalists are uneasy that a news organization could be targeted.

“This goes beyond hoping to stop the disinformation. The goal that we have is to hold people accountable,” said attorney Steve Skarnulis, who represents Eric Coomer, the Dominion employee who remains in hiding. Coomer has also sued pro-Trump news outlets, Newsmax and OAN.

Skarnulis hopes that in addition to helping Coomer clear his name and return to a normal life, the suits will also serve as a warning.

“I hope that it will shock media and other personalities who have the platforms they do, enough that they will be much more cautious about spreading disinformation.”

The number of defamation lawsuits and the large damage claims associated with them is novel, said journalism and public policy professor Bill Adair, head of the journalism program at Duke University.

“I think this is a completely new way of tackling misinformation,” said Adair who also founded the fact-checking website Politifact, which presents research and analysis to misinformation being spread by public officials or circulating on social media.

But even with that discomfort, Adair has come to believe the lawsuits do have a role to play.

“The basic concept that I’m coming to embrace is that we need to incentivize truth and we need to de-incentivize lying,” he said. “Money is what matters to a media company, and so a defamation lawsuit is a big way to do that. And so it’s going to get their attention.”

The defamation suits already do appear to be having an effect. An anchor for Newsmax walked out on a live interview with My Pillow CEO Lindell when he started making unsubstantiated claims about Dominion voting machines. Fox News, the Fox Business Network and Newsmax also aired segments that contradicted the disinformation their own hosts had amplified.

Last month, Fox Business also cancelled a show hosted by Trump ally Lou Dobbs, who had amplified the conspiracy theories and interviewed Powell and Giuliani about them.

One challenge for the plaintiffs is that defamation lawsuits are difficult to win. They need to show the person they’re suing knew a statement was false when she made it, or had serious doubts about its truthfulness.

Media organizations have a First Amendment right to report the news, and that includes repeating what important people say, even if those statements are false, said George Freeman, the former in-house counsel for The New York Times, who now heads the Medial Law Resource Center.

Pro-Trump outlets are likely to claim that constitutional protection for their defense but Freeman believes they may have crossed a legal line in their presentation of election fraud claims and in some instances applauding obvious falsehoods.

“It’s been depressing to me because I’ve kind of campaigned for that privilege [by news organizations] to be accepted,” Freeman said. “And now… they’re trying to use it, but in a case where the speakers are irresponsible and the networks are not reporting them neutrally, but they’re endorsing them.”

Still Freeman said he thinks the strongest defamation cases aren’t against the media companies, but against one of the people they gave a lot of airtime to, Rudy Giuliani.

“He made certain accusations on TV and in interviews, but then he didn’t make those in court because I think he knew he would be subject to discipline and perjury. So that would seem to be pretty good evidence that he knew they were false,” said Freeman.

(In a legal filing this week responding to one of the suits filed against her, Sidney Powell claimed that reasonable people could not have believed the claims she spent months making.)

In a January call announcing the lawsuit against Giuliani, Dominion’s attorney, Tom Clare, said that the court can consider circumstantial evidence too. The complaint includes a detailed timeline that shows Giuliani continued to make his claims in the face of public assurances from election security experts, hand recounts, and numerous court rulings rejecting fraud cases.

“As Mr. Giuliani was warned repeatedly, and as other people backed away from making these statements, the evidence at some point becomes overwhelming that this was not a good faith mistake,” said Clare.

While the current lawsuits could have an impact in this instance, experts on misinformation say there are several reasons why defamation cases aren’t a central tool in the fight against falsehoods.

Many conspiracy theories don’t target a specific person or company, so there’s no one to file a lawsuit against. Legal action is also expensive. Coomer’s legal team expects his bills will exceed $2 million. And when a victim does sue, a case can take years.

The parents of children killed in the Sandy Hook shooting have filed multiple defamation lawsuits against Alex Jones of the conspiracy site, InfoWars. But after numerous challenges and delays, the cases are all still in the pre-trial phase. With Dominion and Smartmatic vowing not to settle before they get their day in court, this approach to fighting election misinformation may still be grinding forward even as the country enters the next presidential election.

But for Adair and others, any effort to discourage future misinformation campaigns is worth pursuing.

“These lies brought our democracy to a breaking point. It’s really scary what happened. So we need to think about what we can do to fix this broken system.”