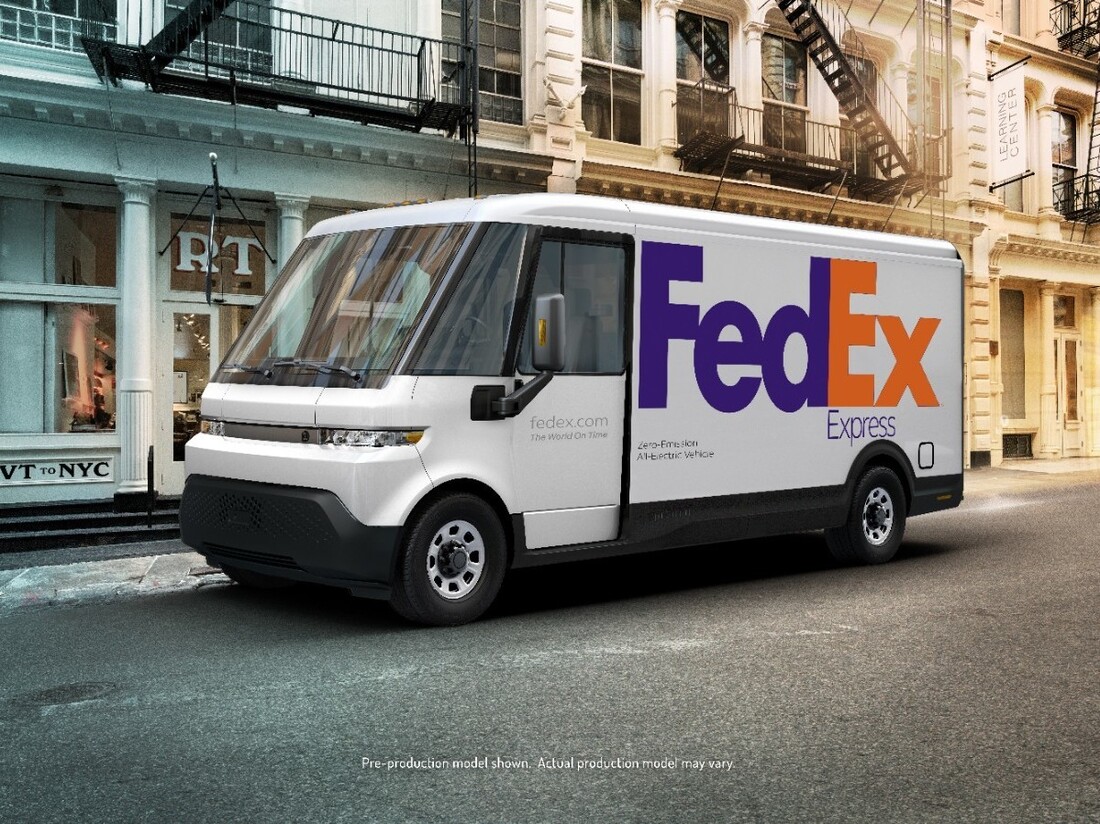 Pictured is a FedEx truck produced by BrightDrop, a General Motors company dedicated exclusively to electric delivery vehicles. FedEx was BrightDrop’s first customer. The delivery company has pledged to replace its entire pickup and delivery fleet with electric vehicles by 2040. 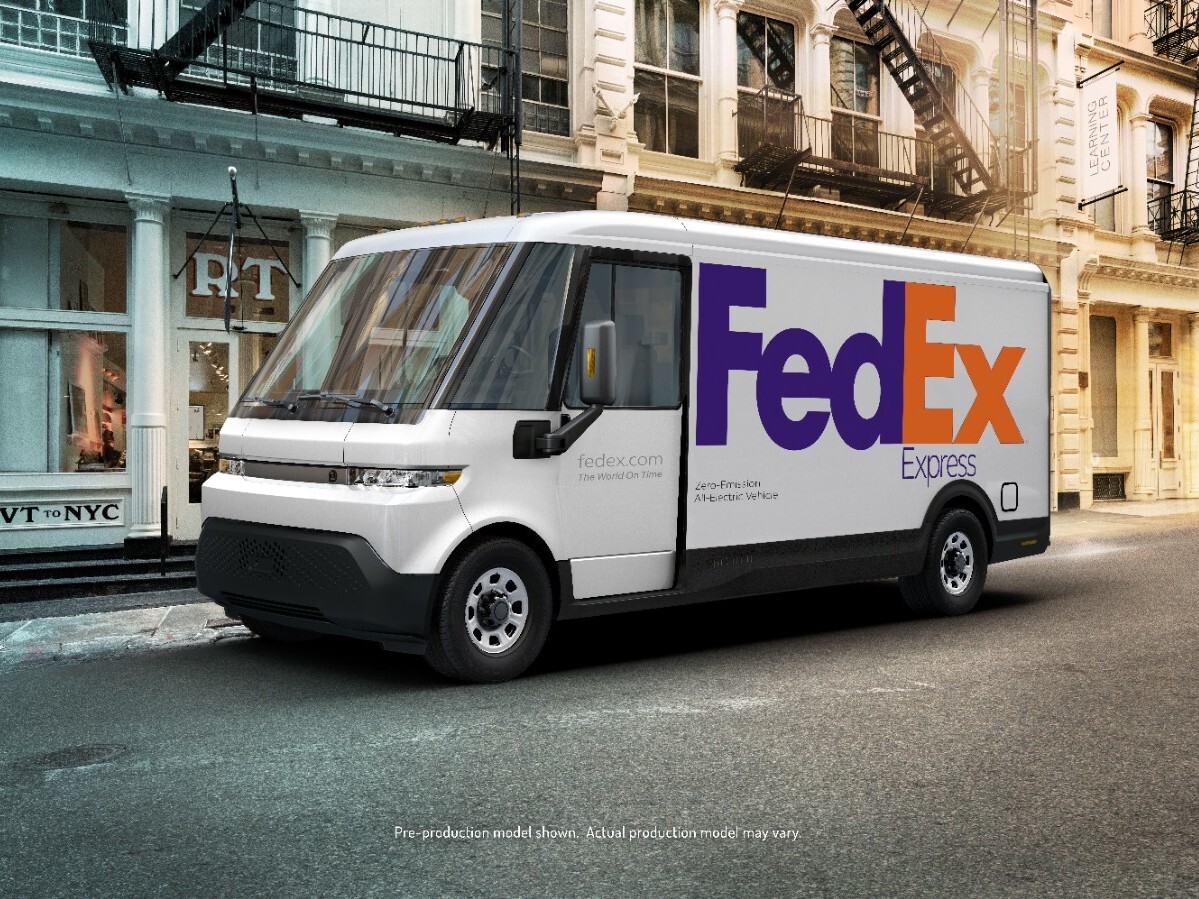 Pictured is a FedEx truck produced by BrightDrop, a General Motors company dedicated exclusively to electric delivery vehicles. FedEx was BrightDrop’s first customer. The delivery company has pledged to replace its entire pickup and delivery fleet with electric vehicles by 2040.

Whether or not you want an electric vehicle in your driveway, you might soon spot one showing up on your curb.

All major delivery companies are starting to replace their gas-powered fleets with electric or low-emission vehicles, a switch that companies say will boost their bottom lines, while also fighting climate change and urban pollution.

UPS has placed an order for 10,000 electric delivery vehicles. Amazon is buying 100,000 from the start-up Rivian. DHL says zero-emission vehicles make up a fifth of its fleet, with more to come.

And FedEx just pledged to replace 100% of its pickup and delivery fleet with battery-powered vehicles by 2040.

(The U.S. Postal Service has smaller electric ambitions, only committing to go electric with 10% of its new delivery trucks — a decision that has led some lawmakers to cry foul over the purchasing plans.)

Switching to electric vehicles for shorter distances makes a lot of sense for companies like FedEx.

Compared to the 18-wheelers that carry packages between states, delivery vehicles — typically vans and smaller trucks — are much easier to electrify, with current battery technology providing enough range for many routes. And companies also have plenty of charging time.

Jackson calls it an “ideal situation.”

“If you think about it, our vehicles operate throughout the day picking up and delivering our customers goods,” Jackson says. “And in the evening, they come back to our stations and they’ll be parked there overnight.”

And, while electric vehicles are still expensive up front, Jackson says this switch will also serve the bottom line. Electric vehicles save money on fuel, and because they have fewer moving parts, they’re also cheaper to maintain.

“That experience that we’ve had over the last decade with with respect to electric vehicles … not only did they have high operational efficiency and and performance, but they were also cheaper to operate as well,” Jackson says.

One challenge, though, has been sourcing enough electric vehicles to meet the needs of a giant fleet.

In fact, during General Motors’ keynote speech at CES — the tech conference that’s usually focused on whiz-bang innovations like augmented reality and robots — the company put the decidedly unglamorous BrightDrop truck in the spotlight.

A delivery truck may not be as jaw-dropping as a flying car, but GM is seeing dollar signs. On a recent earnings call, the automaker’s CEO, Mary Barra, cited analysis that found electric commercial vehicles could be a $60 billion market within a decade.

This focus on electrifying commercial vehicles is a shift, for automakers and for many sustainability advocates.

Jane Lin, a professor at the University of Chicago, says efforts to cut carbon from transportation have largely focused on passenger vehicles. That’s perfectly logical — there are a huge number of them, far outstripping the number of commercial vehicles.

But when looked at as individual vehicles, she says, “trucks are much dirtier vehicles, much less efficient.” So each commercial truck or van that goes electric has a bigger impact than a commuter’s vehicle making the switch.

Lin emphasizes that electrification is not the only way for delivery vehicles to reduce their emissions: companies could consolidate trips or use smaller vehicles, for instance, and those changes could sometimes be even better than going electric.

But where it’s feasible and done correctly, Lin says, electrifying vehicles can have a significant impact — not only by fighting climate change, but by reducing urban pollution.

“Now is the time to start paying more attention to freight transportation,” Lin says, because it’s only going to become more important over time.

The shift to electric commercial vehicles is coinciding with a pandemic trend: online shopping has exploded, leading to a surge in deliveries.

“Everybody has gone online to do online shopping. And I don’t think that’s going to go away after the pandemic,” Lin says.

And when it comes to your neighborhood, that can only mean one thing, according to Lin.

“You’re going to see a lot more of these delivery vehicles,” she said.