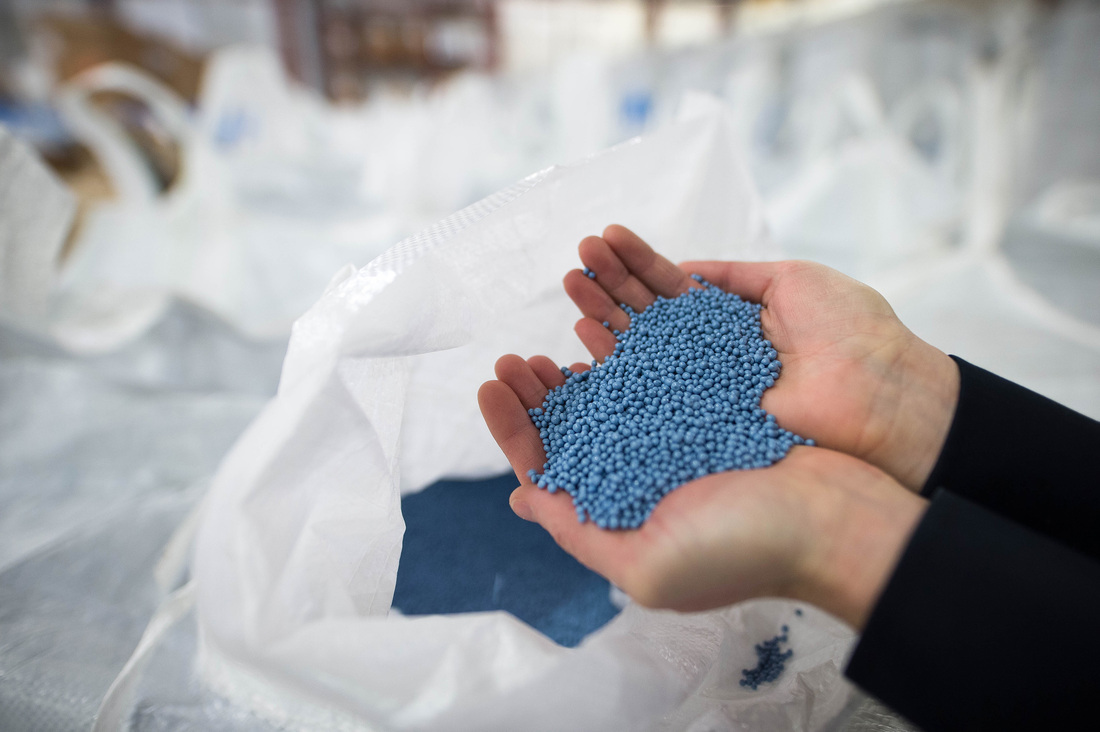 Recycled plastic pellets are displayed at a facility in Ontario. 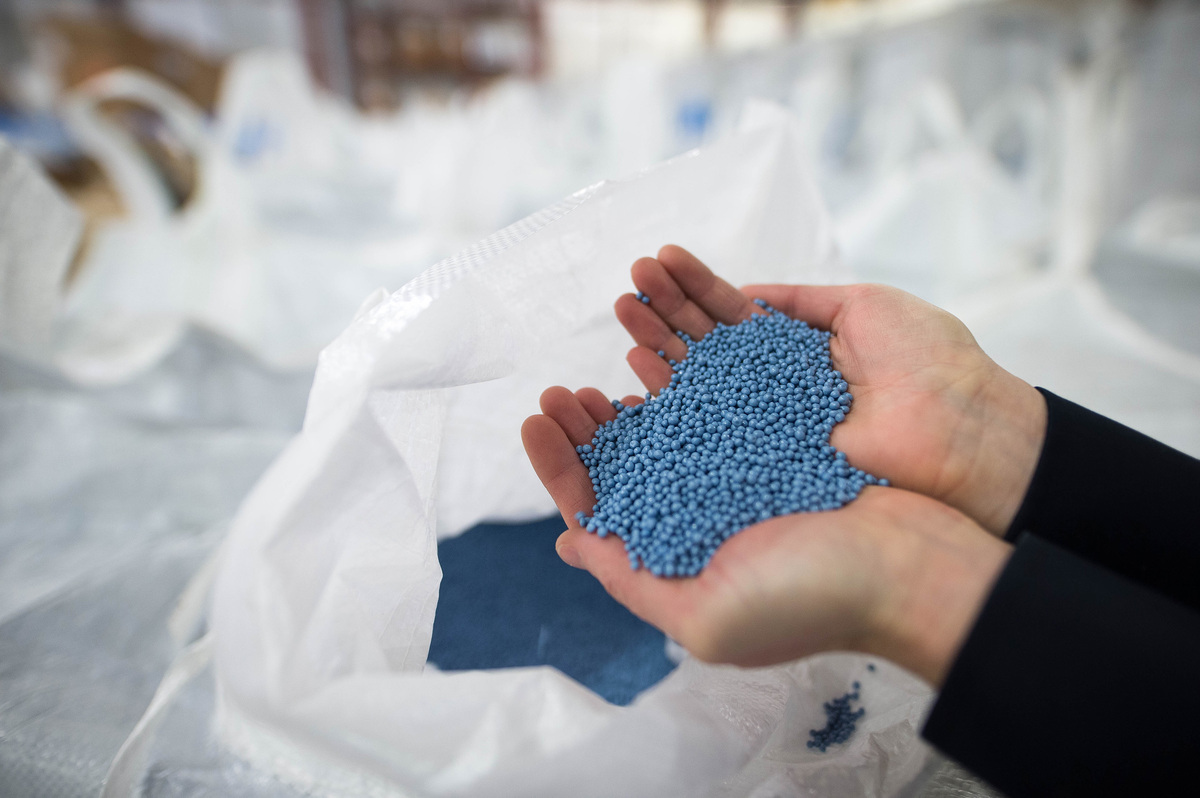 Recycled plastic pellets are displayed at a facility in Ontario.

Look on the side of a highway sometime and you might see them. Or along the railroad tracks or a stream. Maybe even between your toes at the beach. Tiny pearl-shaped pieces of plastic, known as pellets, are the building blocks for almost everything plastic, and they’re everywhere.

They’ve spilled out of petrochemical plants, rail cars, shipping containers and trucks. Large spills have soiled beaches in Louisiana and South Carolina. New research suggests more than 230,000 tons of pellets enter the ocean each year, contaminating the water and sickening birds, fish and other wildlife.

The oil and plastic industry, which makes the pellets, says it has programs in place to prevent any spills. But NPR and PBS’ Frontline found top officials have known about the problem for decades, even as they successfully fended off regulation that might have kept them in check.

The issue first came to a head back in February 1990. Oil and gas spills were already heavily regulated, but spills of pellets, made from oil and gas, were not — and still aren’t. And that year, the Environmental Protection Agency sent a troubling report to Congress. It found spilled pellets had become “ubiquitous” in the environment. It singled out the oil and gas industry, pellet manufacturers and transporters as possible culprits in the spills, which it said were harming wildlife.

Pellets are “the least conspicuous and therefore more often overlooked component of plastic debris,” the report found. “These are frequently ingested by marine life and are also found in substantial quantities on beaches.”

A month later, that report had made its way to the desks of top executives at the nation’s largest oil, gas and chemical companies. It’s one of thousands of documents the industry turned over in the 1990s as part of a series of lawsuits. And buried next to it is an internal memo written by the industry’s most powerful trade group at the time, the Society of the Plastics Industry.

It was a warning — written to top executives at Exxon, Chevron, Dow, DuPont and others.

The EPA is considering regulating companies that make and use pellets, the memo said, adding that the agency might start requiring companies to have permits to use and dispose of pellets.

This story is part of a joint investigation with the PBS series Frontline that includes the documentary Plastic Wars, which aired March 31 on PBS. Watch it online now.

“I would strongly urge you to evaluate any mitigation measures,” wrote top industry official Roy Gottesman. Then the memo offered the executives a solution.

“It may be possible to institute voluntary programs to address the plastic pellets issue,” it said. “But unless this occurs, it is likely the EPA will act independently.”

Four months later, the oil and gas industry launched just such a voluntary program, purportedly to solve the problem of pellet loss.

“We developed a program that was called Operation Clean Sweep,” said Lew Freeman, who was a vice president at the Society of the Plastics Industry at the time, and remembers meetings they held about the program.

“I’d like to think it was because it was the right thing to do,” Freeman said. “But I would also be naive if I didn’t think that much of the motivation was governed by, you know, keeping the regulators off our backs.”

Companies that join Operation Clean Sweep watch videos, sign a form and promise not to lose any pellets. It does not require companies to keep or report any data on pellet spills.

“I don’t recall any discussions about quantitatively measuring the success of the program,” Freeman said. “It was being measured really about who was participating, not what the results were.” 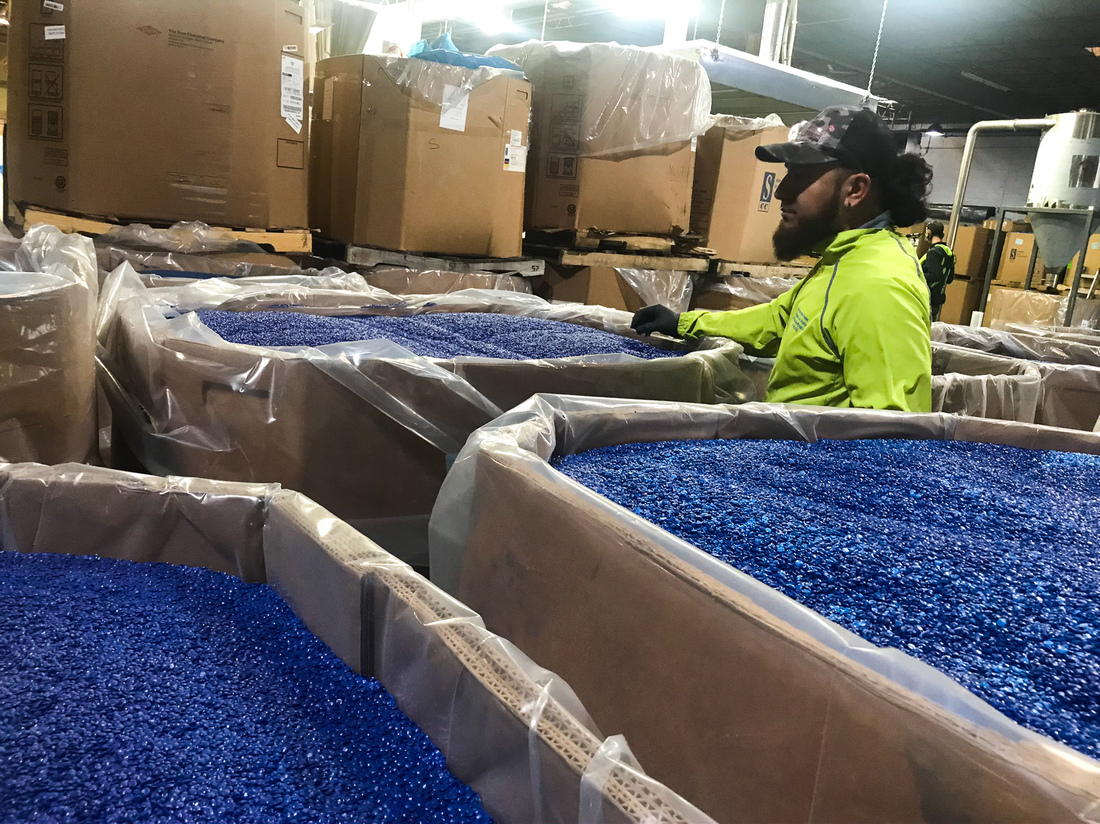 A worker at a plant in New Jersey inspects the quality of pellets. Melt 350 of them, and you get a yogurt cup. Melt 1,000, and you get a water bottle.

It’s not clear if the voluntary program was the reason, but in the years that followed, the EPA did not regulate companies that made or used pellets, and in the 30 years since, the agency told NPR, it has brought just 10 enforcement cases under the Clean Water Act against companies accused of discharging pellets into the environment.

In 2005, 15 years after that memo was written, the industry participated in a study it rarely mentions. The study looked at 10 facilities in California that handled pellets. It found that during heavy rainstorms pellets washed away from every single facility. The study called Operation Clean Sweep “inadequate.”

Industry officials, however, said Operation Clean Sweep has been a success. They said there are fewer pellets, also called nurdles, in the ocean today because of it, though officials were unable to provide any specific data that supported that assertion.

“Pellet containment is incredibly important to our members,” said Steve Russell, who until recently was the vice president of plastics for the American Chemistry Council, the industry’s trade group that jointly runs the program.

Russell said the program was born out of a commitment to keeping plastic out of the environment, not evading government oversight, and that the industry has recently launched a new program, Operation Clean Sweep Blue, in which companies will report some data to the trade group, though that information will still not be made public. 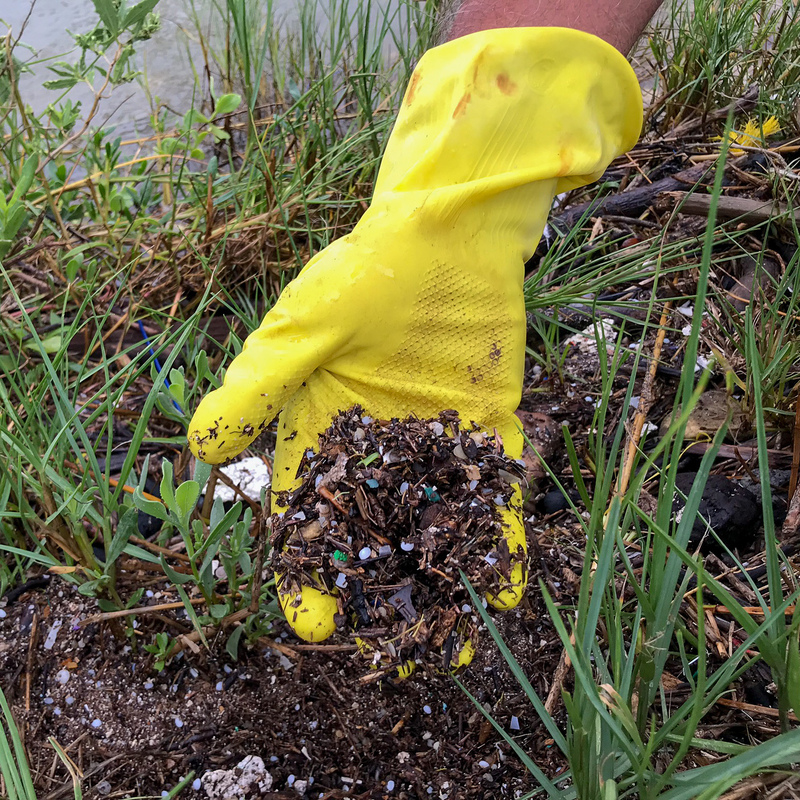 Ronnie Hamrick pulls up dirt near the Formosa Plastics Corp. plant showing dozens of pellets trapped in mud. Fish and birds often eat the pellets, thinking they are eggs.

“If a spill happens, and if we’re going to assume it’s an accidental release,” he said, “then it will be reported and remediation steps can be taken.”

Recently though, Sen. Tom Udall, a Democrat from New Mexico, introduced legislation that would prohibit the discharge of pellets into waterways and possibly require companies that make and use pellets to apply for permits because of what he called “a failure of federal or state oversight officials to enforce pellet practices and loose industry self-policing.”

That self-policing has not led to much quantifiable remediation for offenders. Citizen activists in Texas spent four years trying to get Formosa Plastics Corp. to stop discharging pellets into Lavaca Bay. Formosa recently agreed to pay $50 million to settle the group’s lawsuit.

The company did not admit to any wrongdoing. But among the most striking evidence that led a federal judge to call Formosa a “serial offender” were internal company emails that showed the firm has known about the problem for 26 years.

Even now, fresh, bright-white pellets still bounce around in the marshy water outside the company’s discharge outfalls, and are visible along the road leading into and out of the plant.

Formosa declined to answer questions but said in a statement it is committed to “preventing pellet release” and said it is continuing to improve its pellet retention processes.

Former Formosa workers, however, described long-standing problems at the plant, including being told to cover up pellet spills.

“They want you to put down a certain number” on reports, said Ronnie Hamrick, a former supervisor at Formosa who worked there for 25 years. “They want you to keep it low, so you lie. That’s my job, that’s my bread and butter. I got a family. So I gotta do what they say.” 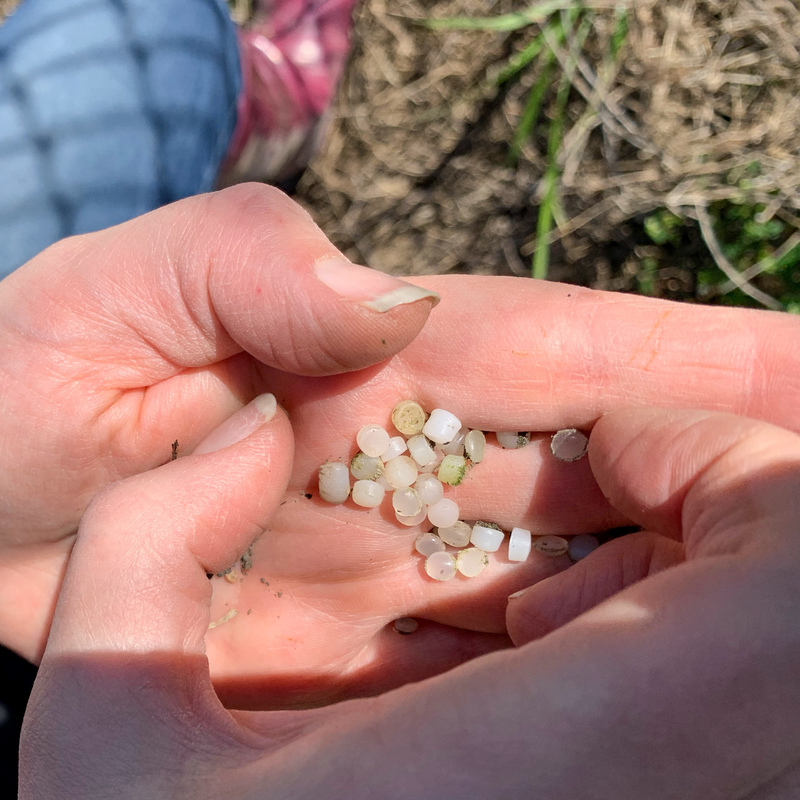 Dale Jurasek worked at the plant for 19 years and said they were told in advance when state and federal regulators were coming, and cleaned up the plant and the discharge outfalls before officials arrived. He said the biggest problems were during rainstorms.

“At each outfall, they put a screen that was supposed to catch these pellets,” Jurasek said. “Well, you get a heavy rainfall, and these plastic pellets slam up against the screen and the screen plugs up. The water keeps rising and it overflows the top.”

“And pellets float,” Jurasek said “It’s real simple. You know, one and one.”

“I have no idea what you’re even talking about,” Hamrick said when asked about Operation Clean Sweep, echoing Jurasek and a third former employee. “I have never even heard of it. Clean sweep what? They’re all in the bay, let’s put it that way. All the pellets, they’re all out here in the bay.”

The EPA has never fined Formosa over violating the Clean Water Act.

Russell, with the industry’s trade group, said Formosa was a “bad actor” and said the company does not reflect the efforts of the rest of the industry.

Leading companies such as Exxon and Chevron recently told shareholders they don’t have a pellet problem. The companies reported that, at their dozens of facilities worldwide each year, they either have not lost any pellets — or have lost just 4 pounds of pellets, which is about two sandwich bags full. 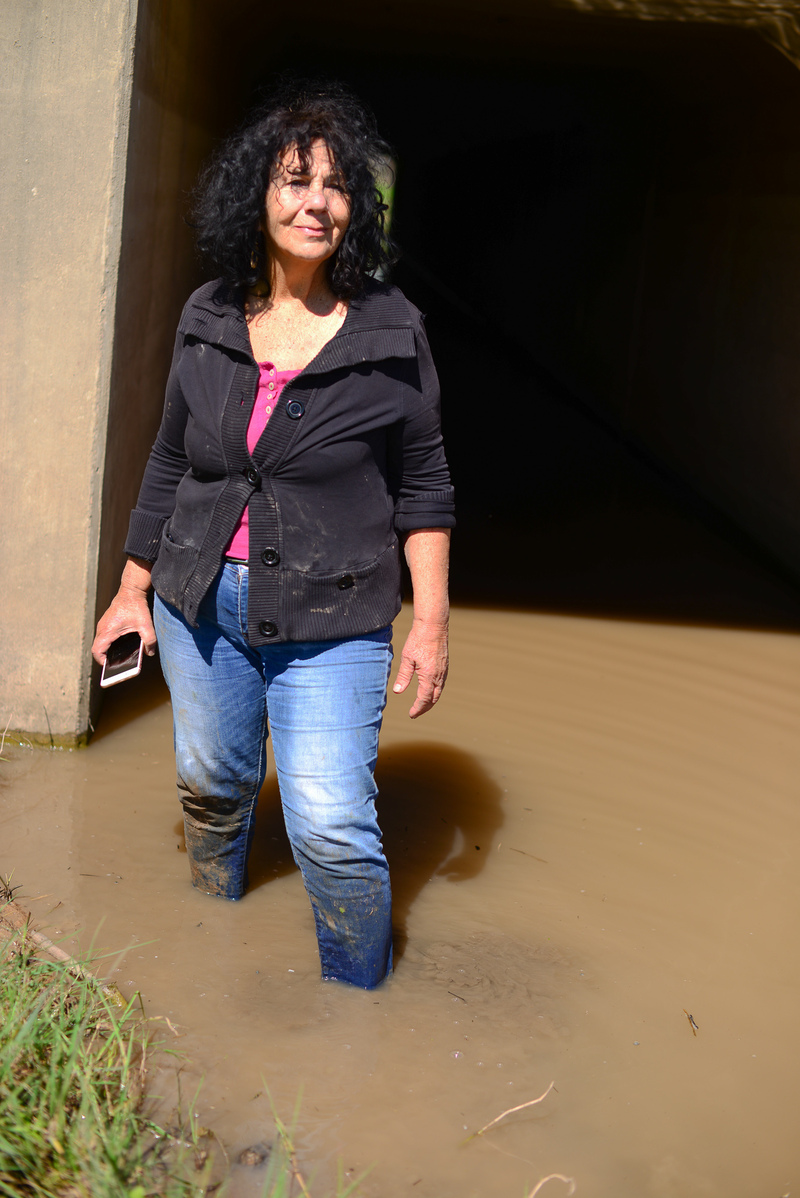 And down along the Gulf of Mexico, where dozens of large petrochemical plants rise from the skyline, pellet manufacturers such as Chevron Phillips Chemical say government intervention isn’t necessary.

“I can tell you that is not a problem here at Chevron Phillips,” said Jim Becker, vice president of sustainability for Chevron Phillips at the company’s plant in Sweeny, Texas. “We have almost no pellets leaving our sites.” Plant officials walk visitors past ponds and drains that they say catch all the pellets, and point out pipes that carry pellets from place to place without spills.

Becker said Operation Clean Sweep makes the difference. “We’ve been practicing that since the company was formed,” he said, adding that he feels confident no pellets are escaping. “We have multiple layers of protection to prevent that.”

But on a recent day, Diane Wilson, one of the citizens who helped bring the suit against Formosa, slogged up a Texas bayou, passing two snakes and a baby alligator, to reach Chevron Phillips’ outfall.

The water from the plant trickled into a marshy little pond of water under a road with a stretch of public land to stand on.

Wilson bent down to look in the grass by the water’s edge.

“Pellets,” she said pointing to hundreds of white pellets bobbing in the water and in the grass. “Yup, right here, look there and see, look there. All of that’s pellets. You can see they’re everywhere.”

This plant cost Chevron Phillips $6 billion to build. It’s less than three years old. Officials said it has some of the most advanced pellet containment systems in the world. 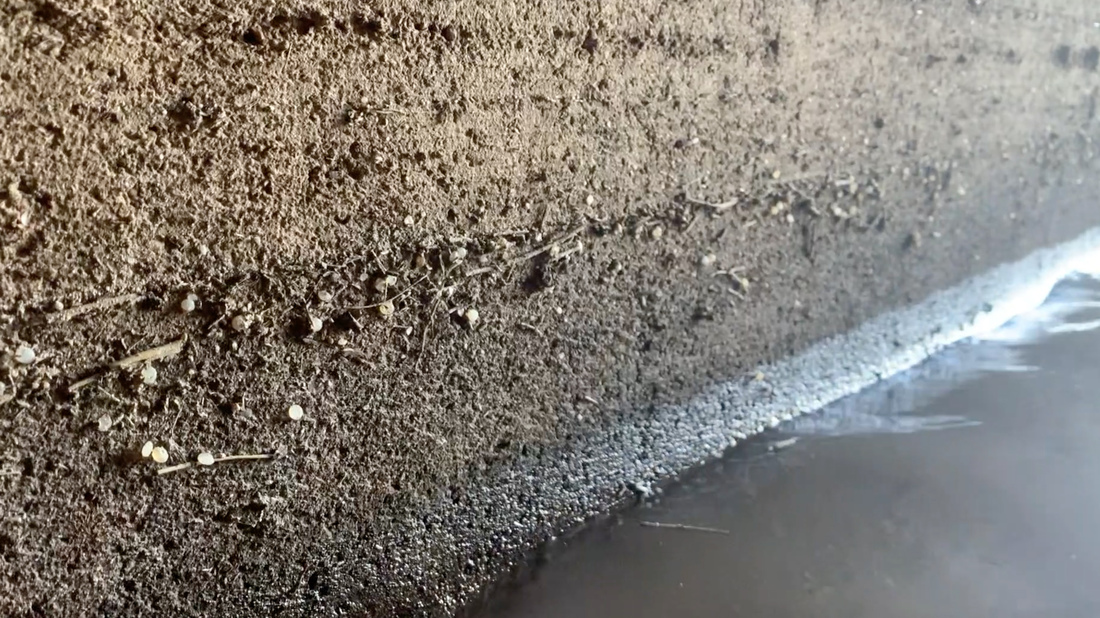 Plastic pellets stick to the wall of a storm drain outside Chevron Phillips’ plant outfall in Sweeny. 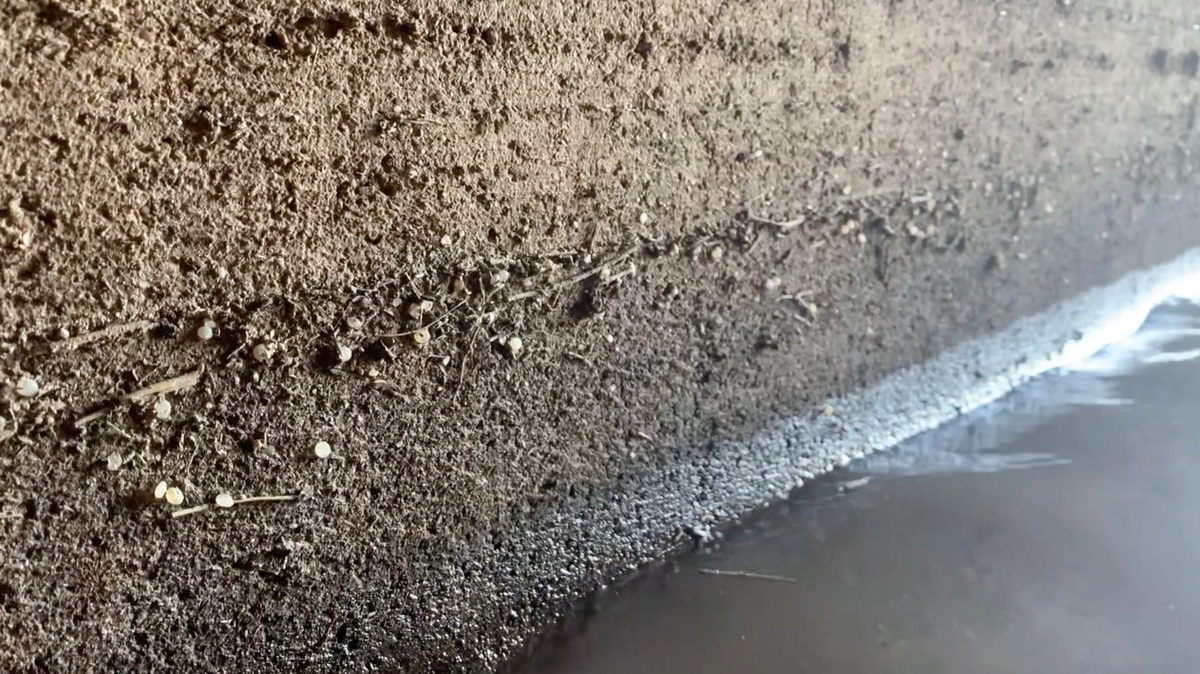 Plastic pellets stick to the wall of a storm drain outside Chevron Phillips’ plant outfall in Sweeny.

“Well, it is,” Wilson said looking across the pond. “And you know we just sit down here five minutes in the mud and pull them out, and probably right across there there’s going to be a lot more.”

Wilson was right. There were pellets lining the walls of a large storm drain, along the fence line that circles the plant, and on the railroad tracks nearby.

When asked about the pellets, Chevron Phillips acknowledged pellets had leaked from the plant but said in a statement that they came from a single storm event and that they’ve since made improvements, including new screens and “pellet patrols.”

They described the escaped pellets as a “small amount of residual pellets.” Still, it took several days and two vacuum trucks to clean them all up.

Cat Schuknecht contributed to this report.