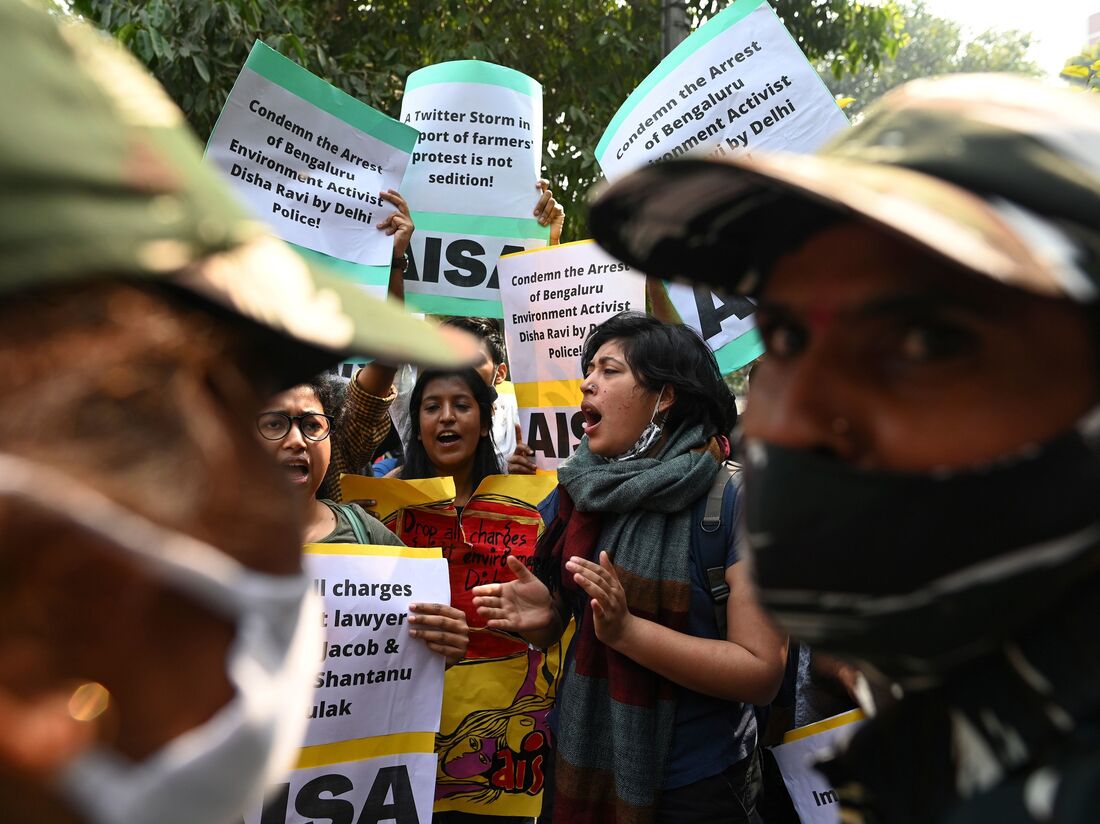 Demonstrators in New Delhi shout slogans during a protest against the arrest of climate change activist Disha Ravi for allegedly helping to create a guide for anti-government farmers protests. 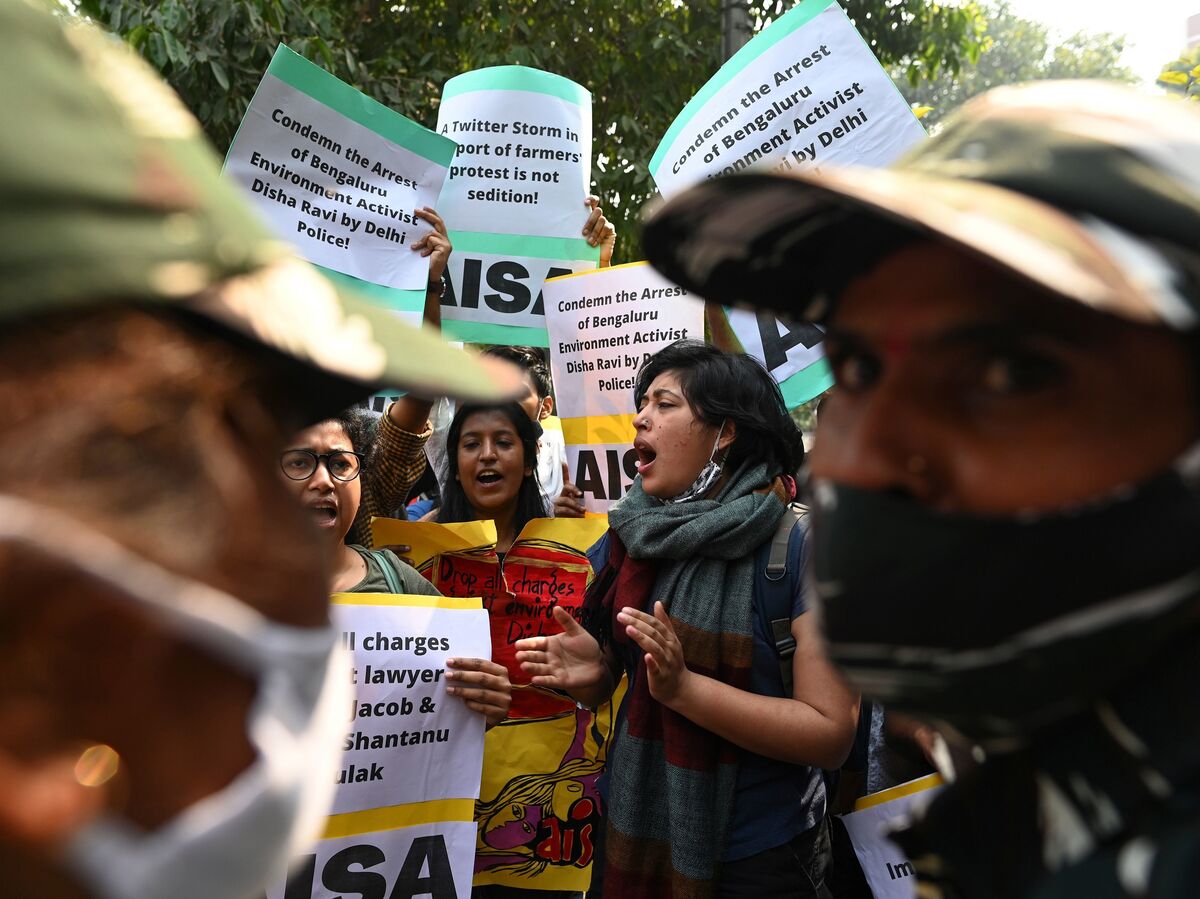 Demonstrators in New Delhi shout slogans during a protest against the arrest of climate change activist Disha Ravi for allegedly helping to create a guide for anti-government farmers protests.

On Feb. 1, the editor of an award-winning Indian magazine got a call from his social media manager: The magazine’s Twitter account was down.

“I said, ‘Are you sure? Can you just refresh, and check again?’ ” recalled Vinod K. Jose, executive editor of The Caravan, which covers politics and culture. “But she said, ‘No, no, it’s real.’ “

Jose went online, and instead of The Caravan’s tweets, he saw a message: “withheld in India in response to a legal demand.”

It was one of more than 500 accounts — belonging to Indian activists, opposition politicians and media — that Twitter blocked that week, on orders from the Indian government.

Days earlier, farmers who’d been rallying for months against the deregulation of Indian agriculture clashed with police in the capital New Delhi. The mayhem overshadowed a military parade on India’s Jan. 26 Republic Day holiday. Twitter was flooded with angry posts from both sides. The rhetoric was intense. People were using hashtags accusing Prime Minister Narendra Modi of genocide against farmers.

Indian law prohibits the publication online of any material authorities deem as defamatory, or that could incite violence. It allows the government to issue emergency blocking orders against tech platforms. In the wake of the Jan. 26 violence, Modi’s government asked Twitter to block hundreds of accounts. At first, Twitter complied.

But after an outcry over press freedom, the tech company reinstated The Caravan’s account and several others. The government then retaliated and slapped Twitter with a non-compliance notice.

Now Twitter is caught between complying with Indian law and defending free speech, in what could eventually be its biggest market — a tech-savvy country with nearly 1.4 billion people.

“It depends on how you read the law, but I think that’s a pretty difficult position to be in,” said Radhika Jhalani, a lawyer who volunteers with the Software Freedom Law Center in New Delhi.

“What happens to your stated policies and values?”

Jose was never told why his magazine’s account was suspended.

“The Caravan did not use any of those hashtags the government was taking objection to,” Jose told NPR. “I can imagine some activists using it, but no respectable media outlet would.”

He knew, however, that the Indian government had not been pleased with The Caravan’s recent reporting. Days earlier, Jose, his publisher and other prominent Indian journalists had sedition cases filed against them, over their reporting about the farmer protests. A Caravan contributor was arrested in Delhi while covering the story.

Still, Jose was surprised that Twitter complied with the government’s order. The tech company says it “exists to empower voices to be heard,” and that it values an “open internet” and “free expression.” In January, Twitter banned then U.S. President Donald Trump, after the Capitol insurrection, for repeatedly breaking its rules against incitement of violence and false claims of election fraud.

“We just saw Twitter getting a lot of appreciation for the way it handled former President Trump’s way of using Twitter to lie, to use disinformation and so forth,” Jose says. “But when it came to India, it was a surprise as well as a shock to see such an important social media company actually getting bullied here.”

“What happens to your stated policies and values and what you stand for?” Jose asked.

In a blog post about the situation, Twitter said it will “continue to advocate for the right of free expression on behalf of the people we serve.”

“We remain committed to safeguarding the health of the conversation occurring on Twitter, and strongly believe that the Tweets should flow,” it said.

The social network reinstated the Caravan’s account in less than a day. It kept some others blocked though, and it took what it called “a range of actions” against more than 500 accounts “for clear violations of Twitter’s rules.” It reduced the visibility of some hashtags. It suspended some accounts only inside India, allowing them to remain visible from other locations. None of the accounts that continue to be suspended belong to activists or media, Twitter said.

“Because we do not believe that the actions we have been directed to take are consistent with Indian law, and, in keeping with our principles of defending protected speech and freedom of expression, we have not taken any action on accounts that consist of news media entities, journalists, activists, and politicians,” the company said. “To do so, we believe, would violate their fundamental right to free expression under Indian law.”

But how do you define an activist, or a journalist? And what happens when Twitter’s definitions are different from the government’s?

“How do we make sense of companies that have such enormous power?”

The standoff in India shows the difficult balance Twitter is trying to strike between its professed values, its business interests in a fast-growing market, and increasing pressure to remove speech that governments don’t like, not just in India but in other countries around the world.

“Turkey is a good example where you have a nominally democratic country with some severe pressures on the fundamentals of democracy, basic human rights protections,” said David Kaye, a law professor at the University of California, Irvine, who previously served as the United Nation’s special rapporteur on freedom of expression. “The government of Turkey will quite regularly make demands that Twitter take take down content of journalists, of activists, of Kurdish reporters.”

India and Turkey both rank in the top five countries that requested Twitter remove content in the first half of 2020, along with Japan, Russia and South Korea, according to the company’s latest transparency report. The Indian government sent nearly 2,800 removal requests in that period, more than twice as many as it sent in all of 2019. Twitter says it complied with 14% of those requests.

Social media has given people who traditionally have not had much power a voice and a way to organize, from the Arab Spring protests a decade ago to the Black Lives Matter movement today.

But Twitter, Facebook and other platforms have also become a potent megaphone for people in power — including India’s Modi, who is now the most followed world leader on Twitter, since Trump was banned.

The uproar that accompanies any decision social media companies make about what gets posted to their platforms — and who gets to post it — reflects the role they now play as de facto gatekeepers of public conversation, Kaye said.

“Fundamentally, what we’re talking about is, how do we make sense of companies that have such enormous power that they can stand up to governments and serve as a kind of protector of rights?” he said. “But at the same time, they have this massive impact that can undermine democratic institutions. And we see that in disinformation, we see that in how they deal with hate speech.”

Twitter and other social media platforms have grown large enough that they can appear to be acting at the scale of governments — but without the accountability of democratically elected leaders or true transparency into their decisions, Kaye said.

“As a matter of democratic principle, we don’t want government to be saying what views are legitimate and what views aren’t,” he said. “Why should we want a company to do that?”

After a virtual meeting between Indian diplomats and Twitter executives, the Indian government issued a statement Feb. 10 defending its actions. It said the problem was not only hashtags about “farmer genocide,” but support for certain Twitter accounts from Sikh separatists and India’s archrival, Pakistan. It offered no proof publicly. (Many of the protesting farmers are from the Indian state of Punjab, where a majority of residents follow the Sikh faith.)

“Freedom of expression is not absolute and it is subject to reasonable restrictions,” the statement said.

Twitter says it has complied with Indian law and is exploring its options. But the Indian government is probably the ultimate arbiter of whether the government’s order is legal, says lawyer Jhalani.

“Basically, if the government of India sends Twitter a notice that says this is defamatory content, or this is inciteful speech, the platform is bound to take it down,” she explains.

Platforms don’t have much choice. India can jail their employees for up to seven years, levy fines — or shut them down altogether. Last year, India banned the Chinese video app TikTok, amid a border dispute with Beijing. India was TikTok’s biggest market.

There have been cases, however, of Indian law being applied unevenly. Last year, Facebook was accused of failing to censor illegal hate speech by politicians from Modi’s ruling party, in order to preserve relations with his government.

India’s Supreme Court is weighing a petition, filed last May, seeking to clarify the Indian government’s powers to regulate content on social media platforms. Clarity from India’s legal system could help resolve this latest matter with Twitter too, says Kaye, the law professor.

“It’s a real opportunity for Twitter’s challenge and basically the challenge that all platforms face in India right now to have that resolved by courts rather than by government ministries that are just making demands that are not subject to the same kind of rule of law requirements,” he said.

But, he warned, that outcome is not assured. “You could imagine the court saying, ‘Look, we’re not in a position to judge whether the government was correct here. And so we’ll defer to the government.'”

Modi’s Hindu nationalist government in India is particularly touchy about criticism from foreign companies, and even celebrities. It lashed out when climate activist Greta Thunberg, pop star Rihanna, and the U.S. vice president’s niece, Meena Harris, all tweeted support for farmer protests.

“The temptation of sensationalist social media hashtags and comments, especially when resorted to by celebrities and others, is neither accurate nor responsible,” a government spokesman told reporters Feb. 3.

Last weekend, Indian police arrested a 22-year-old local leader of Thunberg’s climate movement, for allegedly sharing a social media toolkit with tips on how to drum up support for the farmer protests.

“To protect the country, we all must be more aware of this,” he told lawmakers. In a speech to tea-growers in northeast India, he warned, somewhat cryptically, of a foreign conspiracy to malign the image of Indian tea.

That’s the mood among India’s leaders, as Twitter challenges the Indian government over its own laws.

India has slipped in global rankings of tolerance and pluralism. The question is whether tech companies like Twitter are willing to look past that.

At stake, Jhalani says, are a host of values that Twitter and India – the world’s biggest democracy – both purport to want to uphold.

“Your right to dissent, right to freedom of speech and expression, your right to access content,” she says. “Basically, all the rights that make you a democracy.”