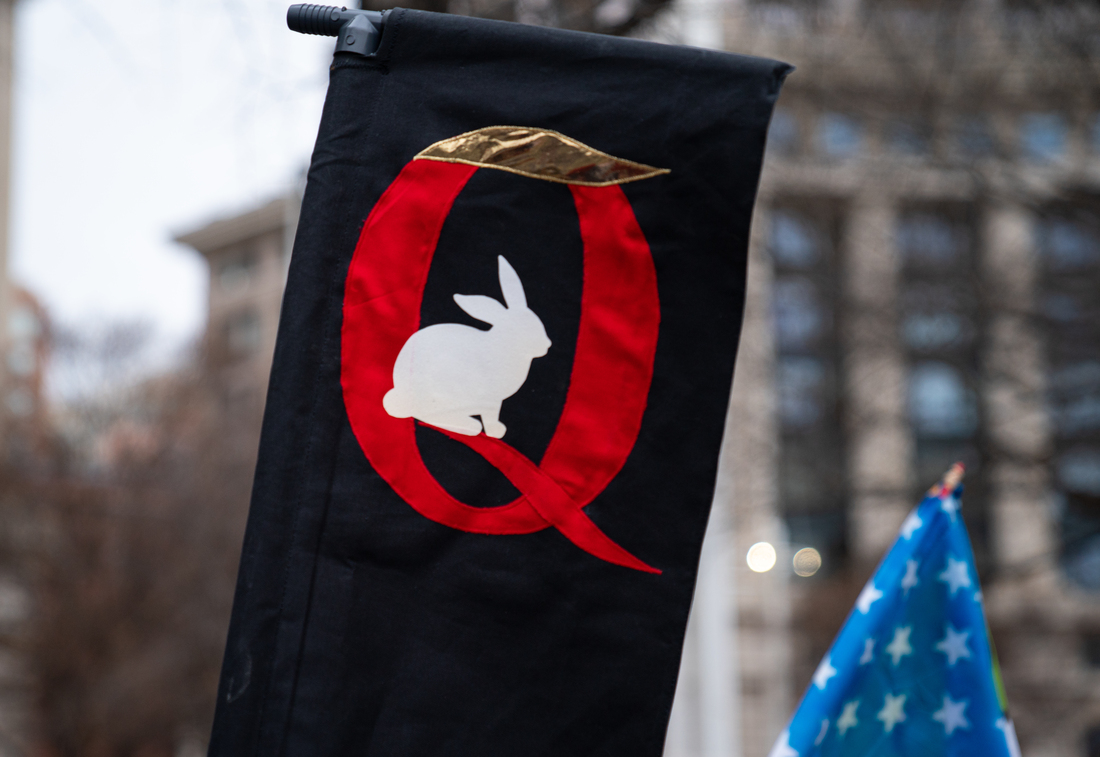 Inauguration Day should have punctured the conspiracy theory at the heart of QAnon.

Adherents of the discredited extremist ideology falsely believe that former President Trump is a savior who will stay in power as he wages a war against a cabal of satanic pedophiles. Indeed, for some believers, who saw President Biden get sworn in instead of Trump, the moment was a reality check.

Yet even with their hero out of office, QAnon’s fiercest followers will find a way to adapt to the new reality by clinging onto more lies that suit their movement, says Travis View, who hosts QAnon Anonymous, a podcast that tracks and debunks online conspiracy theories.

“This is not something that is just going to go away,” View tells Audie Cornish on All Things Considered.

In fact, the QAnon community has survived multiple unrealized predictions preached on Internet message boards since 2017. That’s when its originator, an anonymous individual (or individuals) known as “Q” who purports to have high-level government security clearance, began posting on sites like 4chan. Followers decipher and analyze Q’s cryptic online posts to create a false narrative that has spilled into the real world and even fueled violent acts like the deadly insurrection at the U.S. Capitol.

Q hasn’t posted since December, as View notes. But steadfast QAnon followers remain energized without any one leader propping up their beliefs, he says.

“The belief systems and the conspiracy theories that sustain the movement don’t come from Trump or Q or any specific leader — it’s sort of crowdsourced and self-generated,” View says. “It really is about the community and the feeling that they have some sort of inside information about what’s going to happen, so there’s really no head of the snake. There’s not one thing you can take out that will make the entire movement fizzle.”

Inauguration Day — a critical test for the QAnon community — left some believers disillusioned. But for the most part, the conspiracy theorists instead adjusted their expectations, View told The Washington Post.

The evolving movement has embraced new conspiracies, including that Trump will be sworn into office for a second presidential term on March 4.

View has posted screenshots showing exchanges between QAnon supporters as they discuss their delusional beliefs.

“They come to their conclusion first,” View says. “They decide what makes them feel best and then they construct conspiracy theories that help them convince themselves why that’s true.”

“It’s really kind of like an improvisational reality building,” he continues. “They don’t look to the outside world to try and figure out what is true and what is not, and as a consequence, sometimes have to face harsh truths such as the electoral victory of Joe Biden.

A significant number of Americans say they believe in QAnon conspiracy theories, even after the election. A December NPR/Ipsos poll found that 17% of adults believe that “a group of Satan-worshipping elites who run a child sex ring are trying to control our politics and media” — a foundational falsehood for the QAnon community — while 37% said they didn’t know whether the baseless allegation was true or not.

Last month, several rioters wore QAnon insignia as they stormed the U.S. Capitol. In response, mainstream social media platforms such as Twitter and Facebook began ratcheting up their crackdown on accounts and pages that espouse QAnon theories — and followers have fled to darker corners of the Internet.

View says there’s a misconception that people who believe in QAnon’s false claims are simply “stupid” or “uneducated.”

That’s where the danger lies, he says: “Anyone can fall into QAnon.”